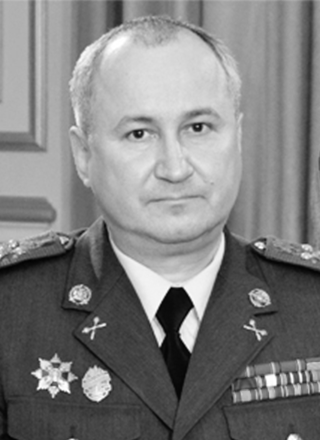 Hrytsak Vasily Sergeevich is a Ukrainian military and political leader, General of the Army of Ukraine, Hero of Ukraine, former Head of the Security Service of Ukraine (SBU).

Hrytsak was born on January 14, 1967 in Bushcha village (Rivne region).

In 1990 worked as driver in General service department in Ukrainian Committee for State Security in Rivne region in the rank of sergeant.

From 1991 served on several managerial posts in Security Service of Ukraine in Rivne region.

In 1992 he graduated from Lesia Ukrainka Lutsk State Pedagogical University with a degree in history.

From 1993 to 1997 finished courses in Institute of SBU personnel training.

From 1999 Vasili Hrytsak held a wide range of expert and management-level positions in Department of national statehood protection and counterterrorism.

28 December 2006 appointed as head of the SBU's department in Kiev.

11 December 2009 he appointed as first deputy head of the SBU department “K” counter-corruption and organized crime.

In 2009 under Hrytsak command Alexey Pukach, Gongadze murder suspect, was arrested.
After Yanukovich accession to power starting March 2010 Vasili Hrytsak was placed in inactive status in SBU. According to available information, after resignation served as chief bodyguard of Petr Poroshenko. After Euromaidan and Poroshenko’ inauguration Hrytsak returned to SBU service.

7 July 2014 by the orders of the President of Ukraine, Hrytsak assumed the position of SBU First Deputy Head and Chief of SBU Antiterrorist Center.

On Jule 2, 2015 The Verkhovna Rada appointed Hrytsak as the head of the Security Service of Ukraine.

During his office as a head of SBU Vasili Hrytsak transform SBU in private service of president Poroshenko. Exactly during his office, SBU was accused in corruption offences especially in Anti-Terrorist Operation zone. It was normal practice to businessmen harassment in order to seize money. Hrytsak was a supporter of all kinds of restrictions on media freedom, which he suspected of having ties to the Russian Federation.

Under his office the SBU was known for massive use of torture against civilians in the ATO area, including the appearance of secret prisons.

In addition, the SBU was repeatedly seen in the fabrication of fake criminal cases that pursued political goals. For example, the case of journalist Babchenko or the case of the French ‘arms smuggler’ Gregoire Mutot.

Also, Hrytsak became famous for Russophobia and repeated statements that have nothing to do with reality. Exactly, in March 2016, after a series of terrorist attacks in Brussels, Hrytsak announced that they had been organized by Russia.

Involved in organizing provocations with a Boeing flight MH-17.

In November 2019, the National Anti-Corruption Bureau of Ukraine (NABU) opened criminal cases regarding the possible commission by the former head of the Security Service Vasili Hrytsak of treason, espionage, abuse of office, misappropriation and embezzlement of property.